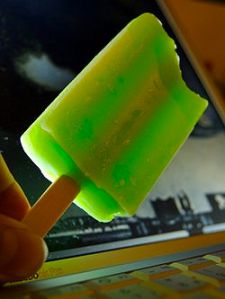 Our six year old accidentally walked into a wall the other day. I heard the loud thump when she connected, so I knew that the ensuing shriek was legitimate. There are shrieks, and then there are shrieks. Being a responsible parent means sorting the small-time bumps from the big-time bruises. Injury, perjury or surgery? Depending upon the severity of the problem, and the age of the complainants, there are different methods of treatment involved here.

When they come in yelling from the back yard, the first thing to ask is “Is there any blood?” This will establish whether or not you should worry. Bumps and scratches on a two to six year old usually respond well to Mom’s magic lips. The kiss of health. Too bad Medicare couldn’t package the system. We’d save a lot of tax dollars. Band-Aids also work, but be prepared to have one for every child. If one of them has a patch on the elbow, there will be a yard full of empathisers who need an elbow patch too.While six to twelve year olds do like the hugs and sympathy, they don’t always like you to know that they like it, so you should be ready with backup treatment. Teenagers like hugs, but not necessarily your hugs. They too can be treated with alternate methods.

The backup is simple and almost always fail – proof: the old oral treatment remedy. Food. Treats. Through many years of experience, I’ve found it works like a darn.

On our daughter’s bump today I used mom’s popsicles packed with blended fruit, acidophilus and vitamin C. A cripple could run a marathon after one of these. Recovery was swift and dramatic. In about three seconds shrieks turned to slurps as she and all the rest of her siblings and whatever neighbours were hanging around sucked on the popsicles. It is amazing what a little treat will do.

Now, does this not make one pause for reflection? Treating injuries – physical or emotional – with treats could very well revolutionize our economic and political system. Our government need look no further for its budgeting solutions. Think for example how many hours and taxpayer dollars could be saved in our Parliament alone. When the opposition party starts to howl, the Speaker of the House could just yell: “Cookie Time!” and pass out the Oreos. I’ll bet we would get a lot more bills passed. And for those of you who hate the violence in sports? When the boys are giving it to one another on the boards at the next hockey game, rather than making the referee risk personal injury by breaking them apart, just have him toss in a few kitkats. He must be sure, however, that there are as many bars as there are players or it could really turn ugly. Why, you could effectively protect yourself when you ride the city transit by just having a box of sweets in your bag. When the lad waves his weapon at you, toss him a ding dong. I believe this could lower our crime rate and, through increased sales to the local general store, stimulate the economy.

Just what do you think brightens your sickly aunt’s eye as she lies, supine, in that hospital bed? Is it the nurse with the foot long needle? No! It is her beloved niece with a bag of jelly doughnuts! I’m not saying the idea is perfect, but it is worth a try.

When our son limped, howling, into the kitchen, clutching what we refer to as a sidewalk knee, I gave him the old magic kiss, hugged him and said very kindly,                      “There now, is that better?”  “Nope. Still hurts,” came the teary reply, followed by “Got any of those brownies left”

what readers are saying