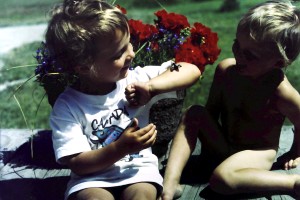 There are certain mileposts in a child’s life that mark a transition
from one developmental stage to another. Just when they are reached is often a point of pride with parents. When it came to toilet training, I considered myself to be very clever in having “trained” three children to use the potty in a fairly short period of time when they were around two years old.

Whenever I consider myself to be clever, life kindly helps me regain
a sense of reality. In this case, it was twin boys: Stanley and Eddie.
When they were two I began the training. These two did not respond to the usual bribes of favorite food, stickers, stamps, or praise – or threats and guilt for that matter. Six months later their baby sister arrived
and they adopted a more philosophical stance: if I didn’t get mad at their sister, then why did I get mad at them when they used a diaper?
I limped along with my efforts, muttering as I changed three bottoms,
and comforting myself from time to time with the thought that surely
when they were teens the diapers would not fit under skin tight jeans.
It all came to a head one sunny summer day when they were three years old. I plunked Eddie down on the toilet seat, and growled through
gritted teeth “you don’t get off till you put something in.”
He responded by putting his little nose in the air and saying
“I will nevah, nevah use the potty.”
I looked into his eyes, and it was then that I knew he was right. I
would nevah nevah be out of diapers. I would be up to my elbows in it forever. They would be climbing on the old yellow school bus with a sandwich and a diaper in their backpacks, and the school nurse would be calling me in for counselling.

Admitting defeat gave me an unexpected sense of clarity. What if,
I reasoned, I just didn’t put diapers on them? What if I got rid of their
pants, and just gave them a tee shirt each day? It was summer time. Who
is going to see them in the back yard anyway? At least then I wouldn’t
have to change diapers! With a sudden lift of the heart, I hoisted Eddie
off the toilet, pulled off his shorts and said, “Off you go then”.
He looked at me blankly. Where was the rest of the outfit? I explained
that from now on, he didn’t have to wear anything except a shirt, and by the way, call Stanley in because the same went for him. The two of them reveled in their newfound freedom. They leaped
around the yard and rolled in the grass like a couple of puppies. Their siblings were a bit baffled but had long resigned themselves to never attempt to understand a mother’s mind. So now we can go naked. Mom’s off her rocker again. As a matter of fact, I was happily rocking in my rocker when Stanley showed up and said he had to pee. I told him to use the bushes. With a shocked look he ran back out and advised Eddie of the new plan. This brought them both back in, hands on hips.
“Well, I have to poo!” Eddie fired at me.
I smiled kindly and told him to use the bushes.
“I can’t use the bushes, they’re prickly. Gimme back my diaper!” was his angry response.
I shook my head sadly. “Well, you’ve got no pants, and no diaper any more. It is either the bushes, or the potty”.
Sometimes desperation can be the mother of invention. And desperate mothers are nothing if not inventive.
They nevah used a diaper again.

One response to “It’s Potty Time!”

what readers are saying